Companies often blame their lack of diversity on a shortage of qualified candidates. But, it’s not about a shortage. It’s about capitalizing on your assets and identifying the large pools of diverse talent that are being overlooked and waiting to be discovered.

Little diversity in companies is contributing to a lack of differentiation, a lack of being most equipped to serve customers, and a lack of being viewed as an employer of choice for job seekers.

Companies are in desperate need to evolve with today’s talent demand. You won’t bring in a diversified pool of qualified candidates with unconscious bias hindering your results.

AI is helping to solve the problem

AI has the potential to level the playing field for all individuals, no matter their sex, race, age, or background. Valeria Stokes, chief human resources officer and staff diversity officer for the American Bar Association, says, “The problem is that many businesses and managers will say, ‘We don’t even need to talk about diversity because we’re only interested in hiring the best talent,’ and then they’re ignoring unconscious bias. What they assume is that there’s a level playing field for women, for people of color, for economically and socially oppressed groups — and that means those groups aren’t going to be given a fair shake.”

The first thing for recruiting organizations to acknowledge is that unconscious bias is a major problem.

“We are trying to ensure that our culture understands how bias exists everywhere, and being aware of it is critical,” says Bridget Boyle, Roche Diagnostics’ vice president of human resources.

Maxwell Huppert of MarketSmiths contends, “Engaging in the fight against unconscious bias can yield some seriously meaningful results.”

Forbes Technology Reporter, Ellen Huet, relays, “The idea that you can methodically stamp out unconscious bias (also called implicit or hidden bias) has caught fire with tech companies because it’s relatively new, data-driven and blameless – everyone is told they have it and can’t avoid it, so no one is singled out or gets defensive. It’s a vast improvement on the years when diversity training amounted to lawyers telling managers what to do to cover their backs from lawsuits, said Freada Kapor Klein, a longtime diversity advocate and partner at the Kapor Center for Social Impact. In truth, most of the old methods don’t work. A 2009 review of hundreds of studies showed that the effects of most diversity efforts, including trainings, remain unknown, and a 2006 study looking at data from 708 private companies found that diversity trainings didn’t produce more diverse workforces. It’s time to try something new.”

Diverse companies are more competitive, better equipped to serve their customers, and are increasingly seen as an employer of choice for job seekers.

Strokes says, “We have to look at evidence-based outcomes to affect change. By fostering an understanding of the positive outcomes of diversity talent management efforts, you can overcome diversity fatigue and heighten awareness of the need to change.”

Ted Greenwald, a Wall Street Journal reporter on artificial intelligence says, “The same technology that enables a navigation app to find the most efficient route to your destination or lets an online store recommend products based on past purchases is on the verge of transforming the office — promising to remake how we look for job candidates, get the most out of workers and keep our best workers on the job.

These applications aim to analyze a vast amount of data and search for patterns — broadening managers’ options and helping them systematize processes that are often driven simply by instinct. And just like shopping sites, the AIs are designed to learn from experience to get an ever-better idea of what managers want.”

AI is able to identify the most relevant results and direct you to them.

Geoff Harris, COO and Co-Founder of JabaTalks, states, “The goal of AI in Talent Acquisition is to invite objectivity into a previously subjective process, while simultaneously increasing the speed of screening candidates, minimizing human bias, and helping assess soft skills more precisely.”

The disruption enables recruiters to impact and improve the lives of candidates and the growth of companies, adding value to an industry that desperately needs a makeover.

Our daily lives are impacted by AI. How often do you use social networks? A navigation app? Google search engine? Amazon shopping? I’m going to go out on a limb here and guess the answer is very often. You’ve already adjusted to using AI in your everyday life. And, you’re probably better for it. Now, it’s just time to embrace it in talent acquisition.

‘The Voice’ got it right

I don’t know about you, but NBC’s hit show, ‘The Voice’, is one of my absolute favs. The concept of four superstar coaches judging talent with their back turned to them represents a fight for the diversity that our world desperately needs. If the coaches watched as the performer came on stage, they would unconsciously judge them by their appearance before giving them an unbiased opportunity. Bias is a part of our daily lives whether we want to admit it or not. We like to believe that we don’t have those gears constantly turning in our brains, but our past, our routines, and our everyday thought-processes lend themselves to make us biologically wired to be biased, and to quickly categorize the world — and everyone in it.

The judges are essentially aiming to eliminate unconscious bias from their decisions in order to find the best talent. The fear of missing out on qualified and unique talent, simply due to bias, was greater than the fear of settling for a lack of diversity.

You’re probably wondering how this relates to recruiting. It’s time we embrace Intelligence Amplification, using technology to augment human intelligence and capability to eliminate human bias from the recruiting process. AI will draw unique insight from large pools of data, produce data-driven decisions, and accelerate the recruiting process to place candidates faster — all while eliminating our unconscious bias.

I hear so many people say, “I got into recruiting to help people.” They believe that AI is essentially removing the human aspect of recruiting, eliminating their ability to reach people in the very same way that they fell in love with recruiting for. The best part about AI is that it allows recruiters to solely focus on the human side of recruitment — empowering them to help and impact more people than they could without it. That’s what people have a hard time understanding because of the sudden disruption it’s bringing to their day-to-day workflow. Let’s be honest, no one likes disruption. It’s annoying and can be burdensome. AI isn’t. It provides a smarter, more efficient, and more impactful recruiting process, while not disrupting the way you work. Eliminating human bias is just one of its many differentiators in creating better companies.

Glen Cathey, senior vice president of global digital strategy and innovation at Randstad, says, “By speeding up the process and ensuring more relevant results, sourcing and recruiting pros can focus on connecting with candidates, engaging with them, and getting them hired.

As the competition for the right people has taken priority in the staffing industry, business leaders have to be more discerning in their candidate selection. AI enables them to find a new approach to assess an applicant’s likelihood of success and create a pool of diversified talent — quickly and objectively.

It’s truly fascinating how AI is working to solve the problem of diversity in the workplace. Has it solved it? Clearly not. Is it on its way? Absolutely. I don’t know about you, but that’s something I want to be a part of.

Just like ‘The Voice’, “blind hiring” is working its way into the recruiting space. It’s no longer about filling reqs as fast as you can and compromising for average talent just to fill a job. It’s about finding the BEST — no matter sex, age, or race. That requires unconscious bias to be at work behind the scenes. AI gives you that.

It’s a critical time to make things happen in talent acquisition. Companies are depending on being a differentiator. Start with working to close the diversity gap with AI. Your boss will thank you later (and so will each life that you impact).

“We are trying to ensure that our culture understands how bias exists everywhere, and being aware of it is critical.” 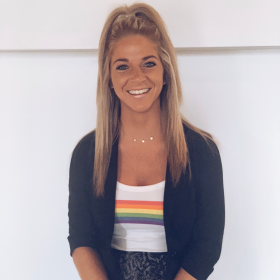 Like most people who gravitate toward writing, Abby has a love for helping people. She takes pride in bridging the gap between people and technology, and enabling others to make sense of the two working together for a greater impact. You’ll catch Abby around town at a local brewery, enjoying the outdoors with her German Shepherd, or cuddled up on the couch with a glass of wine and her latest new read.
More posts by Abby Carter